The blue, green water was deep but I could still see through to the reefs and rocks on the bottom. The sea began to rise and swell. I had the impression that the sea was very pregnant. It kept rising, growing and building in strength. An awareness came over me on how powerfully dangerous this swelling of the sea was. Listening, there was a deafening quietness before the storm. What came to mind was the coming of the tsunami in the movie "The Impossible." This awareness woke me from the dream. I got up out of bed to shake off the uneasiness of how powerfully dangerous and crushing this sea could be. And there was an overwhelming feeling of not being prepared for this kind of situation. I asked the Lord, "What was this dream all about?", "What does it mean?"

Laying back in bed I suddenly saw myself standing on the shore of the sea watching huge waves come in. 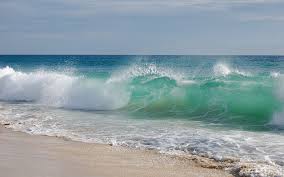 Mixing in with the roaring waves were living, human bodies tumbling ashore. So many waves, so many people! And the word SALVATION!  Salvation: Hebrew: yasa: to save, help in distress, rescue, deliver, set free (Bible Study Tools) and "In Christianity, union or friendship with God and deliverance from original sin and damnation. Jesus promised salvation to his followers." (dictionary.com)

I saw a bulging net of fish thrown on the shore, and the words "It will be so easy." And I knew that the swelling of the sea and these mighty waves washing up on shore reflected a massive amount of people being saved and brought into the Kingdom. Hallelujah! It was so exciting but this amount of new believers was overwhelming. Am I ready? Are we ready? There was a sense of urgency to GET READY, PREPARE, and to PREPARE TODAY for what is coming!

You know the saying, ‘Four months between planting and harvest.’ But I say, wake up and look around. The fields are already ripe for harvest. John 4:35 NLT

...“I will put My law within them, and I will write it on their hearts; and I will be their God, and they will be My people. And each man will no longer teach his neighbor and his brother, saying, ‘Know the Lord,’ for they will all know Me [through personal experience], from the least of them to the greatest,” says the Lord. “For I will forgive their wickedness, and I will no longer remember their sin.”

“This is what the Lord says: The One who gives the sun for light by day, the fixed order of moon and stars for light by night, Who stirs up the sea and makes its waves roar—the Lord of Armies is His name...  Jeremiah 31:33-35 AMP, CSB